As always, light spoilers ahead.

This particular trope could probably be a series all its own, as I believe it to be the historically most prolific representation of cross-dressing across time. The Clown is the use of cross-dressing and transgenderism for comedic effect.

I was reminded most recently of this trope while re-watching Boy Meets World, which remains one of the greatest shows of my generation. But it was the 90s, and despite my rose-tinted glasses, things were even less progressive for transgender issues then than they are now.

Really, though, you could throw a dart at a board full of the most popular shows of the last 30 years, and you would almost certainly land on one where this trope was used at least once for comic relief. In fact, if you are especially bored, you can kill some time digging through the tropes of the Crossdresser category on tv tropes.

Does this trope make me mad? Not really. If done well (actually, see the Boy Meets World episode “Chick Like Me”), I can even find it enjoyable. But it does nothing for my self esteem.

Actually, in trying to think of my favorite depictions of transwomen in media, I found that one could very well fit this category: Carmen, from Always Sunny in Philadelphia. 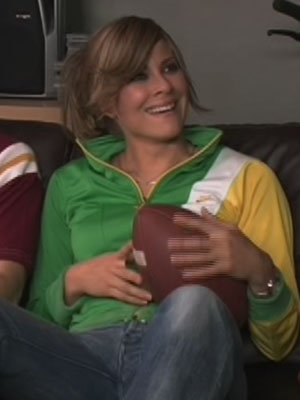 Carmen is a clown in two ways. One, she enters the show as a pre-op transwoman, who still has a very obvious bulge in her pants. Jokes ensue. Two, another character, Mac (whose friends suspect of being secretly gay) falls in love with her, failing to realize that she is a natal male. More jokes ensue.

What I love about her character, however, is that she never makes any excuses for herself. She is funny, kind, and objectively pretty. Yes, I have a penis, but what of it? I’m still a woman.

Eventually, Carmen has SRS, and Mac regrets treating her the way he did when he discovered she was pre-op. But Carmen is still exactly as she was before the surgery: just as fun, just as kind, and just as pretty. And especially, just as confident.

So yeah, I guess tropes like these aren’t necessarily a bad thing, but I still have a deep fear of just being a “man in a dress.” I will never be Carmen, I will just be Eric Matthews as Chantal DuBois.